Articles on: Getting Started

Rhino.fi is a frictionless multi-chain platform that gives you access to all the best decentralised finance (DeFi) opportunities in one place. Once you have connected your wallet to rhino.fi and deposited your tokens you can: Buy & sell tokens with ease across multiple different blockchains via Swaps, without having to worry about gas-tokens or different walletsInvest in interest-earning opportunities from across DeFiTrade major tokens for the best prices using rhino.fi's aggregated order book liquidityTrack your tokens portfolio across different blockchains, all in one placeExplore different blockchains with instant deposits & withdrawals between rhino.fi, Polygon, Arbitrum and Ethereum mainnetTransfer your tokens to other rhino.fi registered addresses within the rhino.fi platform for very low fees

How secure are my funds on rhino.fi?

Rhino.fi is self-custodial, meaning that only you have access to the tokens you deposit to rhino.fi. The rhino.fi operator/team cannot access your funds at any time. In a worst-case scenario, if rhino.fi were to go offline, you can withdraw your tokens back to the Ethereum mainnet via the Data Availability Committee. Rhino.fi is built on the StarkEx Validium Layer 2 technology. This means that the security of your tokens are linked directly to the security guarantees of the Ethereum blockchain, the second largest blockchain in the world, and you retain control of your tokens at all times. 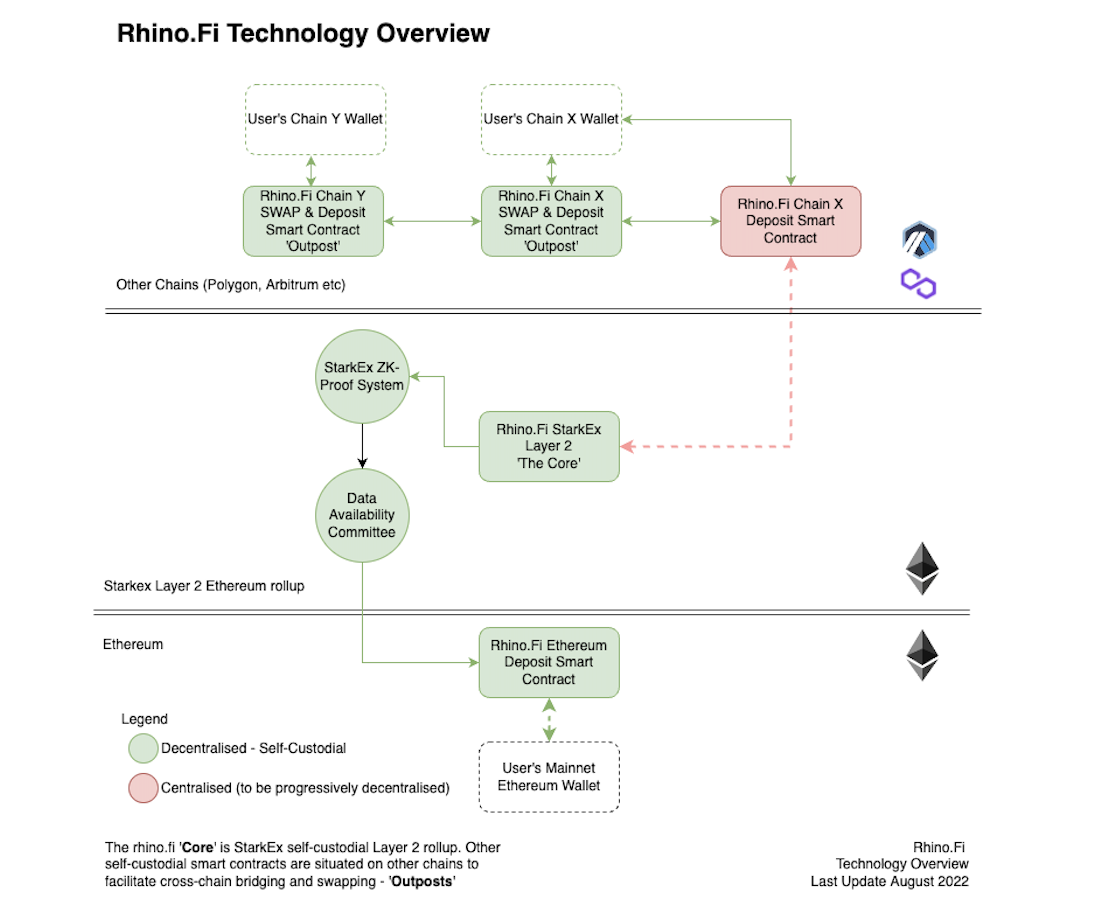 When you use the rhino.fi cross-chain swap feature, your funds are moved from StarkEx to chain X (eg Polygon) via a centralised bridge. After the swap is complete, your funds are held in a self-custodial smart contract on Chain X. Subsequent swaps between chain X (eg Polygon) and chain y (eg Arbitrum) are entirely self custodial and decentralised.Rhino.fi (previously known as DeversiFi) was one of the first projects to launch as a Layer 2 platform and has been operating since May 2020.

Most of your Rhino.fi activity is not visible on the blockchain and therefore you can achieve casual privacy. However, rhino.fi is not a 'mixer' or strong privacy solution. For more information, see this article - Privacy on rhino.fi

Does rhino.fi have a token?