What is the purpose of the Data Availability Committee?Why is the Data Availability Committee needed?Privacy is key to trading. In addition to being slow, existing decentralised exchanges make all trades visible, even though professional traders want to protect their trading activity, and proprietary trading strategies, from competitors and public view. Privacy will be a key requirement for decentralised exchanges to gain traction with this audience moving forward. In order to achieve privacy, rhino.fi traders' balance data will be moved off-chain, rather than being stored on the blockchain. StarkWare, the provider of rhino.fi's scalability engine, is currently exploring other privacy-achieving methods that could be implemented in the future, without the need for data to be stored purely off-chain by a committee. However, the current approach was chosen as a pragmatic solution following conversations with large customers, and will be improved in the future.What is the Data Availability Committee’s Role?The Data Availability Committee has three main functions: Protect user trading privacy by allowing balance updates and trades to be hidden from other users.Check the state of balances and, if valid, sign to allow the merkel root of the state to be updated on-chain.Publish all balances data if rhino.fi and or StarkWare were ever to go offline, or withhold data.The initial DAC committee is comprised of a small number of members, who were selected based on the following criteria. Experience with running high-availability infrastructure.Relative independence from each other.Long-standing public reputation.History of supporting new technology and desire to be leaders in demonstrating the potential of a new second-layer scaling solution for Ethereum.Geographically diverse, both in terms of the entities themselves and their server locations.The initial members of the DAC are: 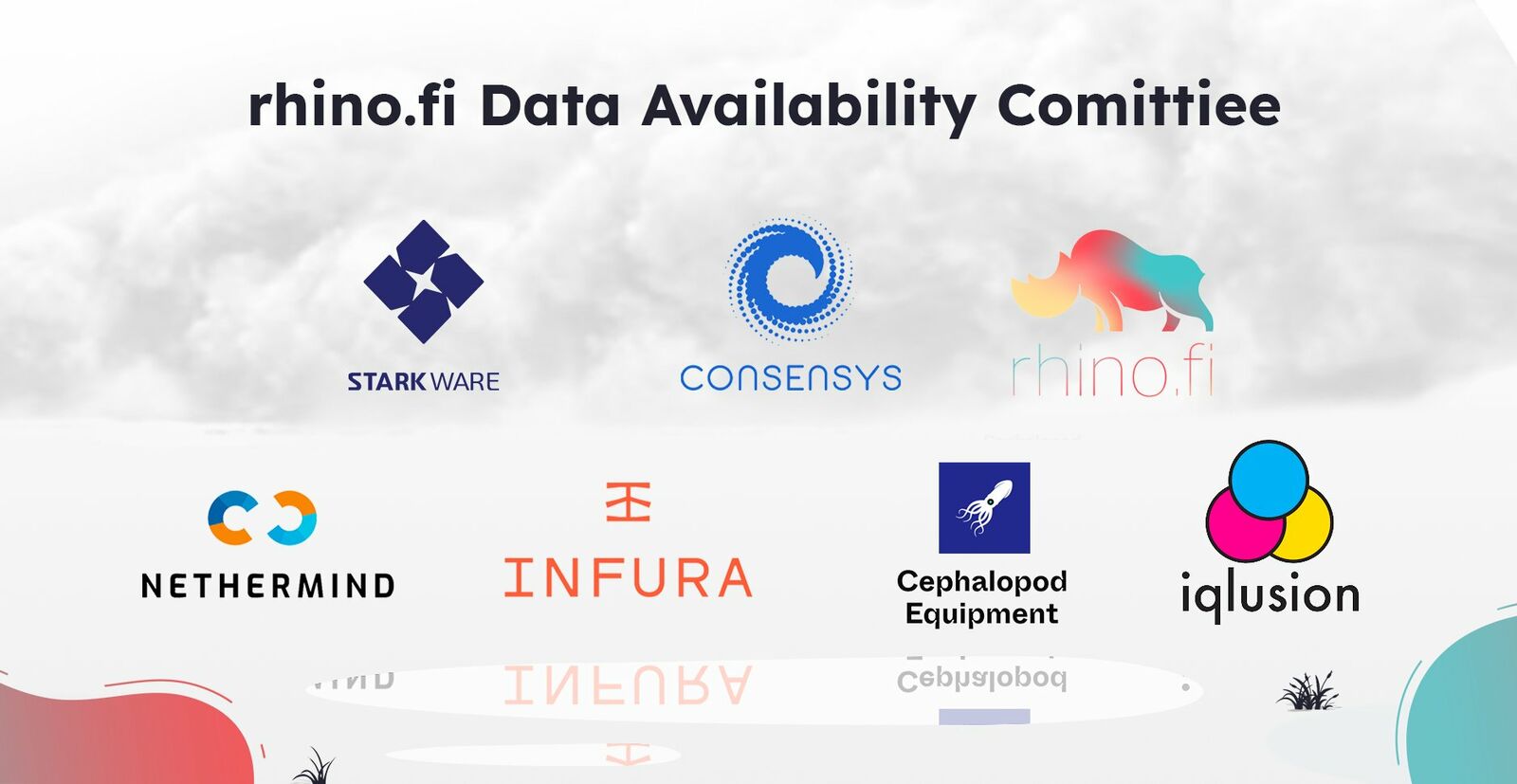 The group will be expected to grow as the size of assets held grows. We are excited to have such a highly respected group of members to allow us to kick off the first-ever STARK-powered decentralised exchange.ConsensysFounded in 2014 by Ethereum co-founder Joseph Lubin, ConsenSys is a market-leading blockchain technology company.InfuraInfura is an infrastructure provider connecting users to Ethereum and IPFS. NethermindNethermind builds Ethereum solutions for developers and enterprises. Boosted by a grant from the Ethereum Foundation in August 2018, our team has worked tirelessly to deliver the fastest Ethereum client in the market, optimised to the very last byte.IqlusionIqlusion provides infrastructure for next-generation cryptocurrency technologies which are designed and built to scale to real-world demands.StarkWareStarkWare solves the inherent problems of blockchains – scalability and privacy. They develop a full proof-stack, using STARK technology to generate and verify proofs of computational integrity.rhino.firhino.fi (previously known as DeversiFi) is the first permissionless exchange allowing traders to execute orders of any size directly from the security of their private wallets. In March 2020 rhino.fi became the first StarkWare-powered exchange, offering deep liquidity as well as high-speed, low-fee and instant settlement.CephalopodCephalopod Equipment is based in Canada, serving the global Cosmos and staking communities. The Cephalopod team has significant experience in data center operations, distributed systems, and cryptocurrency. The team is comprised of long-term contributors to Cosmos including Ethan Buchman, co-founder of the project.How does the DAC work in practice and how are members incentivised?In the normal course of events, committee members are responsible for: Receiving each state transition and signing a commitment to the new stateKeeping a copy of this state private and secureThe exchange’s smart contract does not accept a state transition unless enough committee members have signed on the new state. The DAC has an important role to play in a meltdown scenario, where both the exchange and StarkWare deny users’ withdrawal requests. In such an event, the exchange’s smart contract freezes the system, and committee members are responsible for making all their stored data publicly available so that users can safely retrieve their funds directly from the exchange’s smart contract. This is what is known as the ‘escape hatch’. Each member of the DAC runs a specialist piece of software on a dedicated server and is incentivised to ensure maximum uptime and performance via monthly payments from rhino.fi.Examples of logs from a DAC client are below.For more information on the StarkWare technology, the technicalities of the Data Availability Committee or the escape hatch, see the StarkWare public GitHub repository To apply to be a DAC member, contact us via email on info@rhino.fi.