Everything you need to know about DVF GovernanceAn overview of DVF Governance and how to vote using your staked DVF (xDVF)DVF holders are in control of various aspects of DVF and the DeversiFi protocol. These can be split into two categories: The Big Stuff (Major Proposals)The Small Stuff (Tuning Parameters)Both processes primarily use the xDVF token (staked DVF) for voting and signalling. xDVF tokens can be held on either layer 1 or layer 2 (DeversiFi app)

How to Stake & Unstake DVF tokens for xDVFIn order to be eligible to vote on governance proposals, you first need to stake your DVF for xDVF. xDVF can be unstaked at any time. Ie there are no lockup periodsInitially the DVF <> xDVF staking ratio is set at 1:1. Over time, one xDVF may be worth more than one DVF, for example if xDVF holders vote for DeversiFi protocol fees to be accrued to xDVF holders. Go to the staking dashboard on the DeversiFi appUse the 'Stake' option in the swap widget to swap your DVF for xDVF, using the toggle to select if you would like to stake your DVF that is held in your on-chain wallet, or in your DeversiFi wallet.You can also unstake your xDVF by using the unstake option in the swap widget 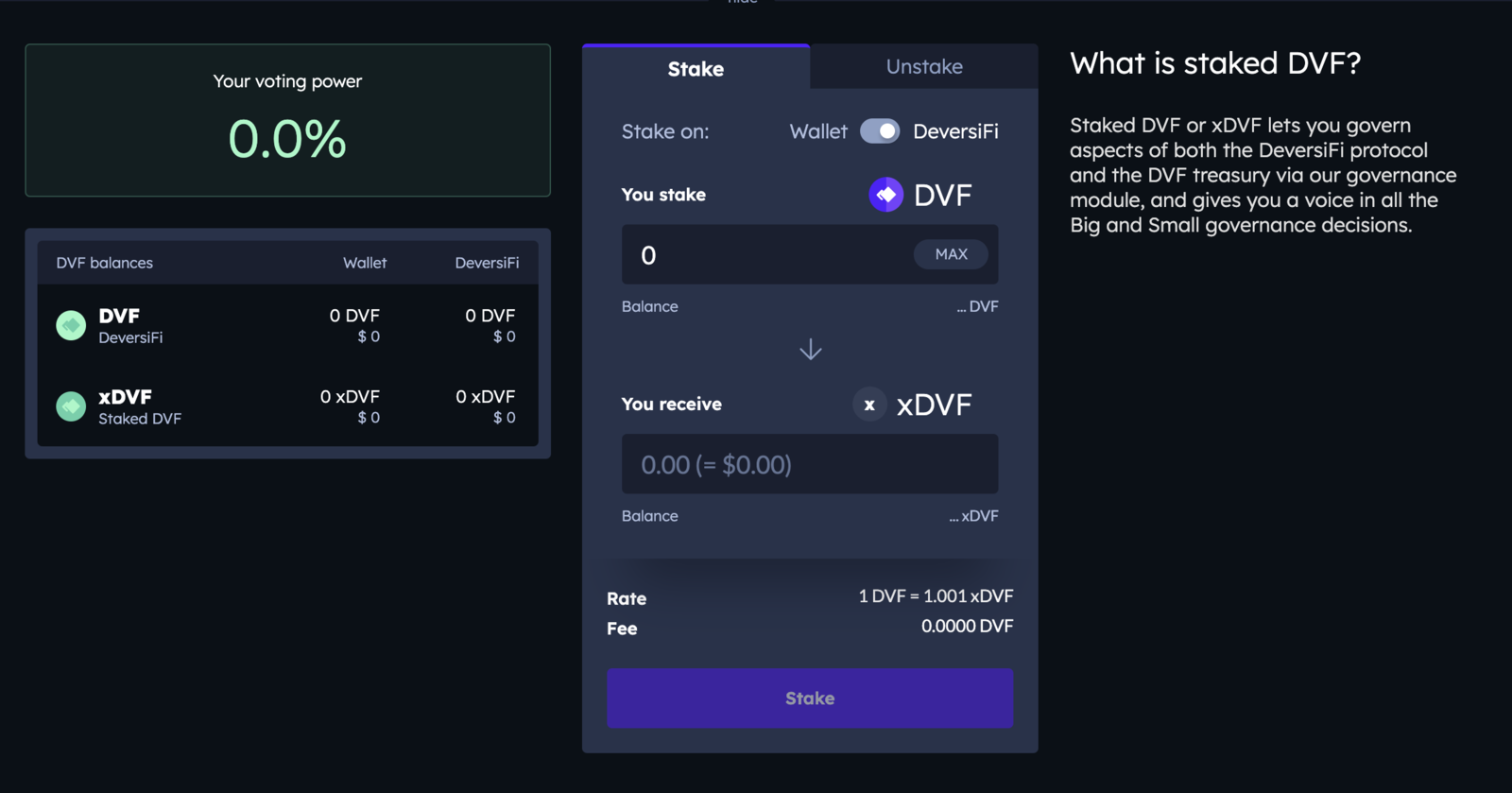 How to Propose and Vote on 'Big Stuff''Big Stuff' proposals are for major changes to DVF, aspects of the DeversiFi protocol and DVD DAO Treasury spending:Spending funds from the community treasuryMaking upgrades to the core deversifi smart-contractsMaking upgrades to the governance process itselfMinting additional DVF tokensApproving major changes to the liquidity mining incentive programActivating a fee switch to send part of protocol fees to the governance moduleThe Major Proposal overview can be found hereSubmit, discuss and debate any major proposals in the DVF Governance Forum (Discourse). You will need to create an account using an email and password in order to participate.

Once the forum discussion has reached and impasse or agreement. submit an Snapshot proposal including details about the final proposal and the transaction which will need to be executed on-chain if the proposal passes.More rules on what kind of proposals can be submitted, as well as parameters can be found here. For example, it is important that the proposal has a long enough voting period, else it will be rejected by the trustless execution service even if the proposal passes.

Snapshot VotingOnce the proposal has been submitted, the proposal and accompanying proposed on-chain transaction is ready for review by the community. xDVF holders can now vote yes or no on the proposal (as well as some other potential methods including rankings), regardless of if they hold their xDVF on layer 1 or layer 2 Voting takes place on the snapshot page. Ensure that you have connected the same wallet that holds your xDVF balance In most instances, an 'affirmative vote' (eg a simple majority) is required to pass a proposal ExecutionThe final transaction can be vetoed by the DVF Council, within a 48 hour window, before it is executed. The DVF council are an initial set of trusted individuals who are responsible for checking each transaction to ensure that no malicious transactions slip through Governance during the initial few months. After the DVF Governance process has been stress tested, Governance can vote to remove this DVF Council from the process. 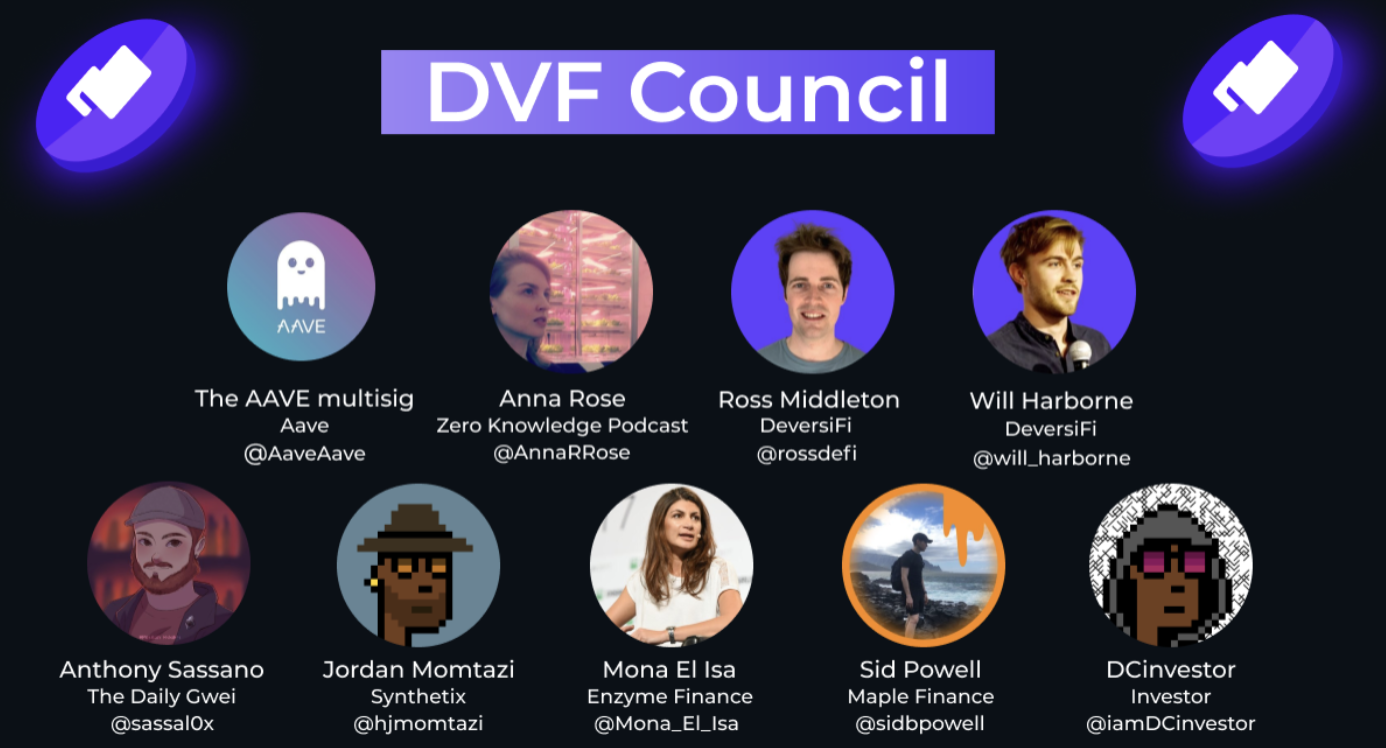 In order for the DVF DAO SafeSnap module to execute a transaction on Ethereum any corresponding proposal must have first passed with an affirmative community vote on snapshot (vote.deversifi.com) and have had this outcome reported by the reality.eth oracle service. More details can be found hereHow to Propose and Vote on 'Small Stuff'xDVF holders can also make changes to DVF and the DeversiFi Protocol that are not considered Big Stuff. This includes:Available dials at initial launch:Swap fee (between 0.2 and 0.4)Transfer fee (between 0.1 and 5 dollars)Liquidity mining total rewards per week (set initially to the maximum)Percentage of fees collected by governance module (set initially at zero and greyed out / disabled until there is a vote on-chain). Once active will be in range of 0 - 25%The Small Stuff governance flow will be launching shortly after Big Stuff governance flow